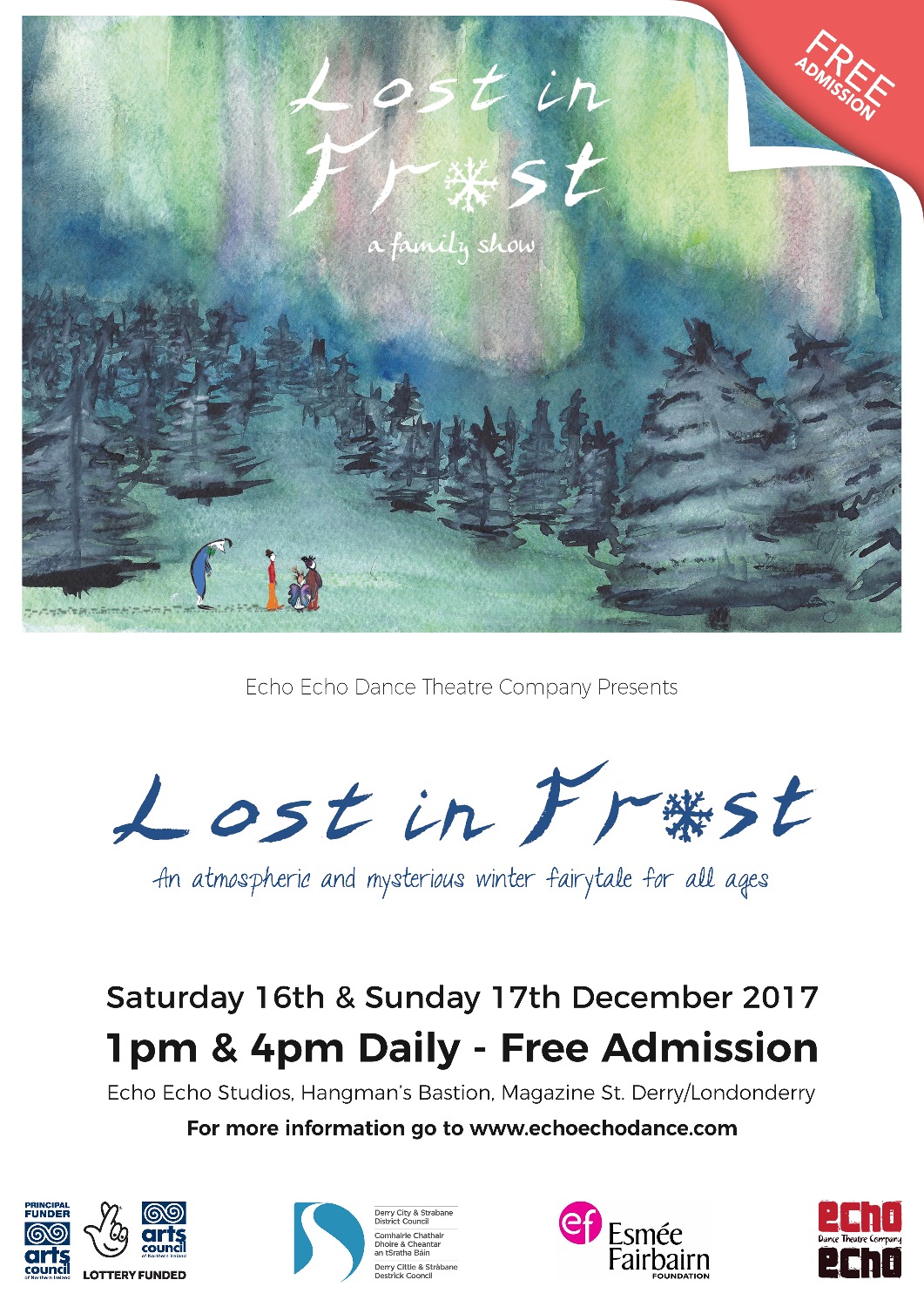 Apologies - no wheelchair access due to technical defect with platform lift.

We are working as fast as possible to resolve this!

***Fully accessible performances of Lost in Frost in Alley Theatre, Strabane on 9th and 10th December.***

About Lost in Frost

Lost in Frost is a new dance theatre show for children of all ages, especially ages 4-11 years.  The show features an original text written and narrated by Kelly Quigley – taking inspiration from Dr Seuss and Tove Jansson books; video projection mapping and stage design created by Barry Davis; and movement and dance choreographed by the Echo Echo Ensemble under the direction of Tonya Sheina.

The Narrator is on a quest for snow but who will help! The audience? The mischievous fairy, Cornelia? Or perhaps some very brave and bold magic pixies will join the mission to find some?

Lost in Frost is a thrilling winter-themed adventure and will delight and enchant younger audiences with a mix of dance, movement, music, visuals and storytelling.

We begin at the beginning

Where the beginning begins

There is a place that is so damp

It’s so mouldy and fungal and littered with dew

I would never live there would you?

Lost in Frost is available for touring in 2019 and 2020. Touring pack available on request.

Audience Feedback for Lost in Frost

This show was so good this evening! I took my granddaughter. It's as enjoyable for us 'grown-up children' as it is for the kids!!! : ) I'd go again if I had time - the 'illuminations' are beautiful. it's delightful to watch, enchanting, funny, full of little surprises with a very talented cast! Thanks to you ‎Echo Echo, I've secured 'The Best Nana' title once again : )

Had the loveliest & most magical wee evening at Echo Echo Dance Theatre Company's Christmas production Lost In Frost - A Family Show. The little 5 year old & 7 year old fairy princesses who accompanied my friend & myself (who are just that tiny bit older) loved it! Just perfect to get into the spirit of the season. Most impressed with the gorgeous visuals & lighting, the sense of awe & imagination, and the beautiful dancing by the two 'rag dolls' aka Zoe Ramsey & Janie Doherty. Urge all those who believe in magic & make-believe, be you child or not, to catch this while you can.

Magical, enthralling (our 20 month old granddaughter was transfixed throughout!) so professional and gentle. I’m looking forward to more children’s performances.

The performance made me feel like I was in another universe.

Lost in Frost artwork by Tonya Sheina and Barry Davis.