The fifth edition of Echo Echo's growing international festival featured a variety of local and international artists and companies...

Echo Echo Festival of Dance and Movement returned for a fifth edition from 7th to 18th November 2017 with an outstanding programme of dance, movement and physical theatre performances in Derry-Londonderry, Northern Ireland.

Welcome to the fifth edition of the Echo Echo Festival of Dance and Movement. It really feels like our festival has now become an established event and that we have created a festival with an identity which suits Derry in its concern with warmth, integrity, humanity, relationships and depth. We continue this year with our approach of programming a mix of work by artists with a long term relationship with Echo Echo Dance Theatre Company and artists new to us and to our region. We continue to favour work which is rooted in the idea that it is people who dance... not just bodies. Please do come along to move and be moved.  Steve Batts, Echo Echo Artistic Director 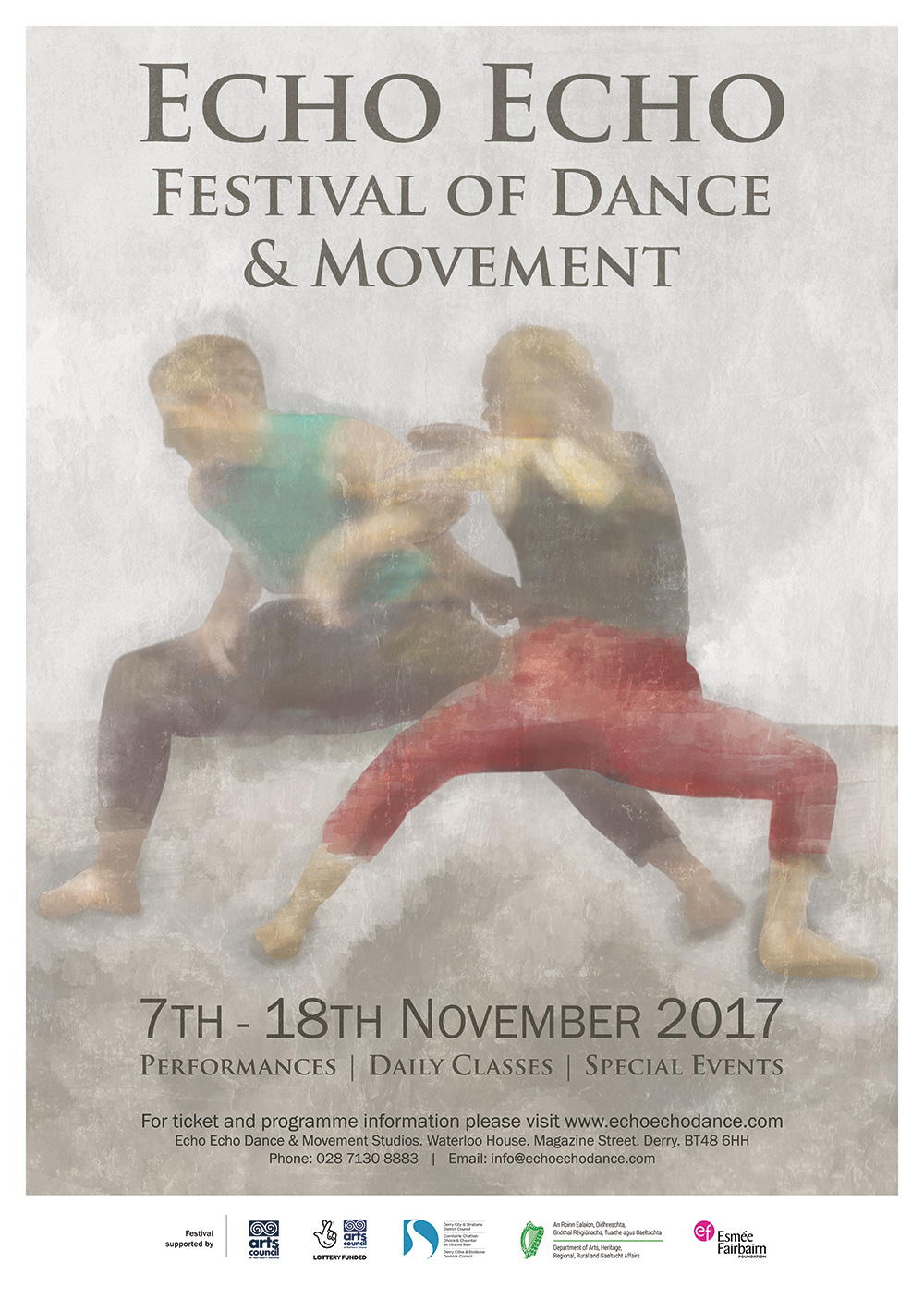 Thank you to all of the artists, speakers and companies for their generous goodwill, positivity, encouragement and genuine interest in being part of Echo Echo Festival – and to all of their circles of colleagues and supporters.

Special thanks to all of the artists and companies for use of their images and video - please see below for list of credits. Thanks to zoocreative for the beautiful Festival artwork derived from an image of Junebug Company by Charles Mugel.

Thank you to our principal Festival funders, Arts Council of Northern Ireland and Derry City and Strabane District Council – special mentions for Gilly Campbell and team at ACNI and to Colin Coyle, Jacqueline Whoriskey, Stephen Gillespie and team at Council; thanks to the Esmée Fairbairn Foundation and Gillian Goode for their ongoing support; thanks to Foyle Foundation for supporting this fifth edition; thanks to the Esmé Mitchell Trust for supporting the 2017 primary schools outreach programme; and thanks to our Festival Friends advertisers.

Thanks to Department of Culture Heritage and Gaeltacht and Aoife O’Sullivan at DCHG for support with the Festival All-Ireland Outreach and Bursary Programme; and thanks to our venue partners and staff at Dance Ireland, Dance Resource Base, Firkin Crane, Galway Dance Project, An Lab, and The Dock Arts Centre, as well as Theatre NI.

Special thanks to Cultúrlann Uí Chánain and staff for their creative engagement and support for the Tradition and Beyond event, especially Peter O’Doherty, Eibhlín Ní Dhochartaigh and Gerry Tracey. Thanks to Aine and staff at The Playhouse.

Thanks to the Echo Echo team: our staff, volunteers, work placements; current directors Margo Harkin, Cath McBride, Paul Johnston, Deirdre Gillespie, and past directors, for their ongoing support and advocacy; Virginia Negru from Contact Festival Bucharest; James and Diane King; Bernadette Sheils; thanks to the Body Wisdom group including Dennis Golden, Marie Manktelow, John McCartney, Carmel Mulrine, Majella Biernat and Liam Cunningham for their ongoing dedication and encouragement; and thanks to the Echo Echo Ensemble Artists whose vital voluntary support often goes unnoticed behind the scenes.

Finally, thanks to you – our audiences, colleagues, friends and family for your continued support!

Thanks to Ciaran Harley of zoocreative for the beautiful Festival artwork derived from an image of Junebug Company by Charles Mugel.