The first Echo Echo CI Festival took place in May 2018. The week long festival included intensives and classes by leading international teachers. THe festival was attended by people from near and far inlcuding guests from Russia, Romania, Spain, UK and Ireland.

Festival Review and Thanks 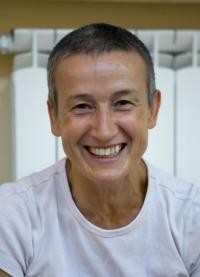 "A workshop about dance, and the things which are visible and invisible in it."

I have studied to be a choreographer. I´ve been taught various skills of training and means of teaching the body of another person. In my “archive” there are many stage pieces from folk dance to ballet miniatures. My work in the Theatre has been the tastiest. The actors, direction and dramaturgy broadened my mind and my image of the dance art form. I began to see how the art of charming the audience is created.

Since I´ve met contact improvisation and the first CI teachers, I practice the art of de-educating the body of another person and disentangling the illusions about movement and dance.

I think that the human being is already perfect the way it is created, and I believe in nature and it´s laws. I dance, investigate and live in accordance with this vision.

I´m prompted in life by the ability to fall in love unconditionally and undoubtedly with people, movement, mountains, journey, ideas. This ability has helped me to learn everything that forms me right now. This is what teaches the others.

CI is the only dance that helps me leave the limits of personality and transform my consciousness. In this sense I´m the student, not the teacher. The better I learn, the more chances the others have to learn something near by  me.

My special interest in contact improvisation is clarity. Clarity towards the practice. Honesty towards how do I move my weight in the space of Gravity. Attention towards clearing the dance from the personal. Letting things happen as they do. 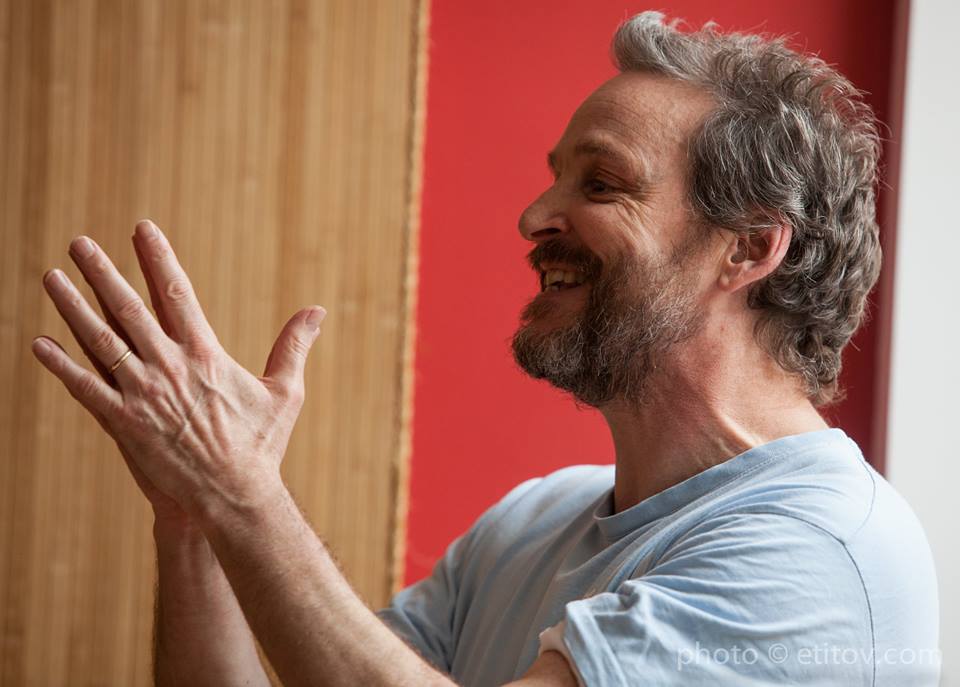 "Approaching Contact Improvisation through the principles of The Alexander Technique."

I have been practicing and teaching Contact Improvisation for around thirty five years and a certified teacher of The Alexander Technique for thirty. The practice of and ideas around these disciplines have been, and remain, central to my artistic, teaching and organising work. I perform, create and teach internationally. I work with professional dancers, performers and musicians and with non-professionals. My practice includes work with people of all ages and all abilities.

Since 1991 I have been Artistic Director of Echo Echo Dance Theatre Company.

In recent years I have been developing, with the support of the dancers of the Echo Echo Ensemble, an approach to dance which I term “Poetic Movement”. This attempts to offer an alternative perspective to the hyper-objectivising of dancers in mainstream contemporary dance and the hyper-subjectivising of the dancer in the somatically based alternatives.

I use a broad definition of Contact Improvisation which I hope respects the tradition, and current and historical stylistic variations, without losing the roots in open-minded experiment, investigation and exploration:

Contact Improvisation is the practical exploration of the limits and opportunities of moving, without rigid plans for particular outcomes, in close proximity and in physical contact, and the observation of the ways in which this exploration changes the doing of and perception of solo movement and movement at a distance.

Generally speaking, when I teach, create and perform I like to embrace the idea of “dance” with all its poetic, musical, formal and expressive connotations. I feel that attention to “movement” should enrich rather than negate dancing and not promote the idea that good function is something separate from feeling, expression, communication and meaning. I don’t think that young, healthy, strong physicalities have, inherently, more poetic potential than others. So if you sign-up your body (whatever its limitations and abilities) for this intensive please don’t leave your metaphoric heart, your imagined soul and your inquisitive mind behind. 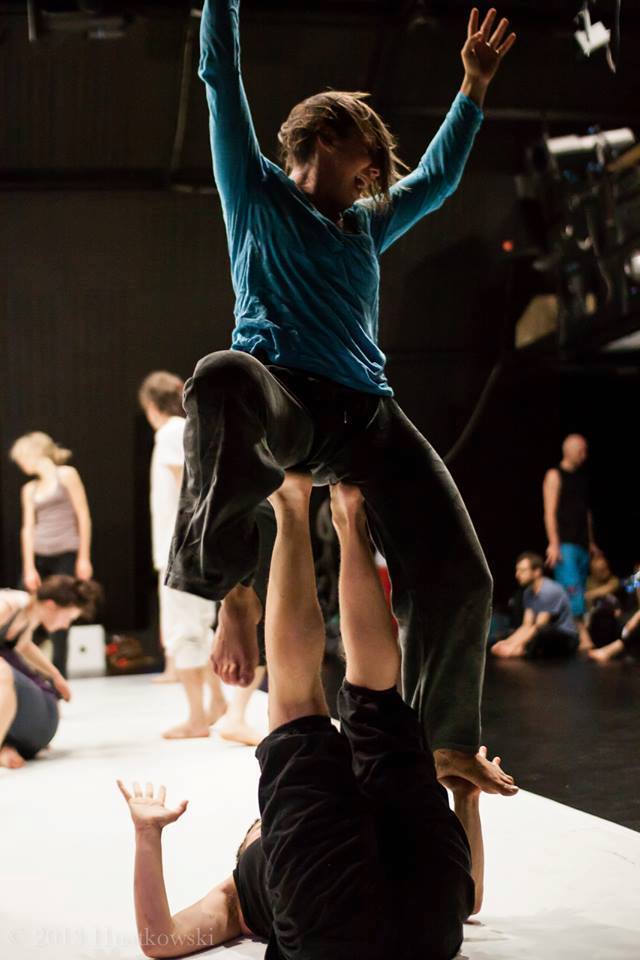 "Walk your way to Flying"

Some  intense personal events followed by a traveling period around Europe and USA between years 2011-2015 participating in CI workshops, festivals and jams gave me clarity and courage to start teaching more and share my life perspective through dance. 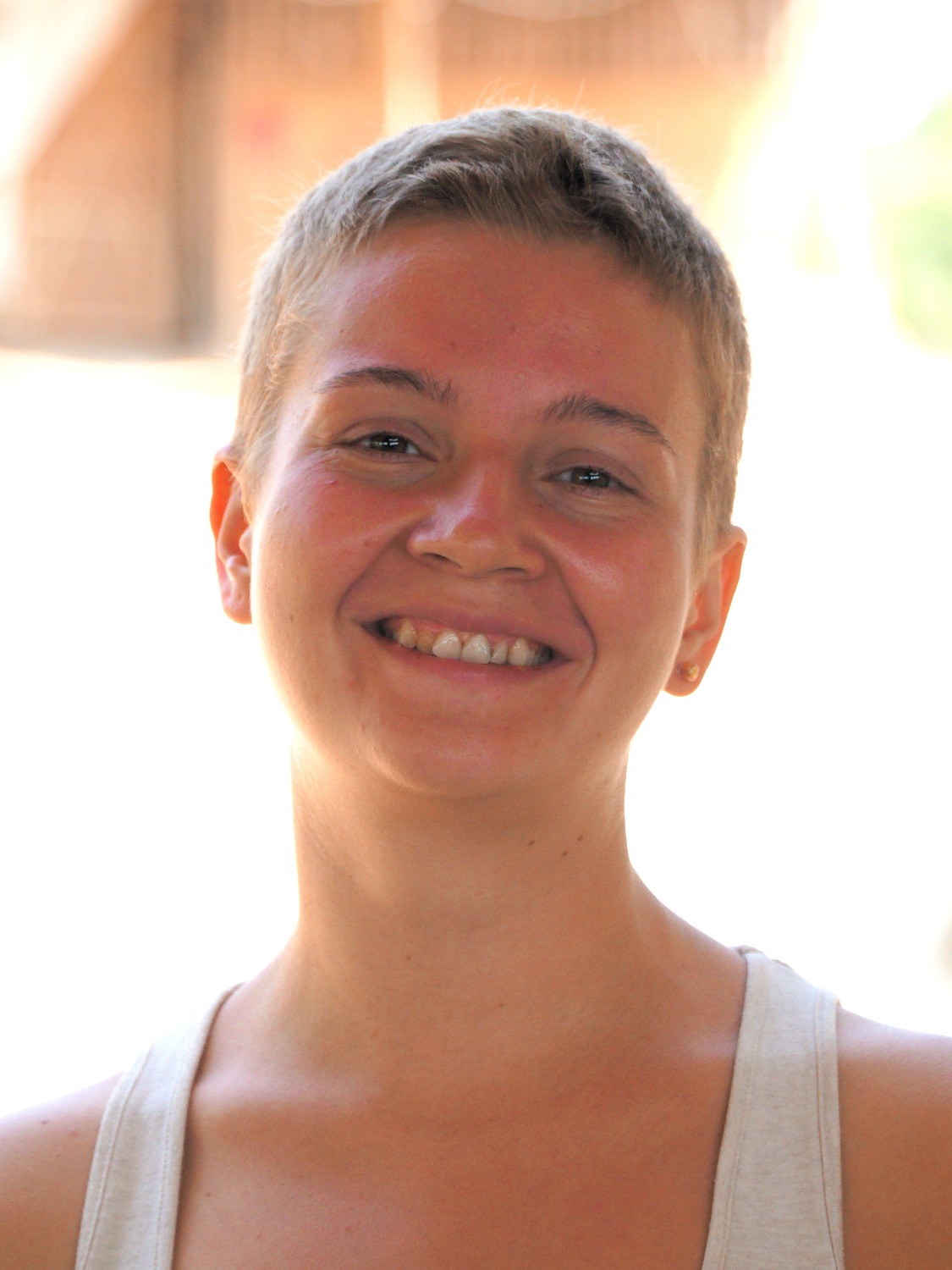 "Released Spirals and Spheres of attention"

I graduated as a structural linguist and before CI did not dance much. I met Contact Improvisation 8 years ago and step by step it pulled me in completely. Now I live in Moscow and travel a lot. Mostly following the dance and a particular dance spirit - Angelica Doniy. I am assisting and teaching - in Russia, Europe and Asia. I love to learn, teach and organise Contact Improvisation events. I am very inspired by such practices as Authentic Movement, Bodywork, Somatics, and with all this I nourish the dance and integrate in my Contact Improvisation practice. Also, I am studying in the Institute for Holistic Dance and Movement pedagogy of Sabine Parzer. My current interest in Contact Improvisation is how to open the field of experiment and exploration... and to be able to let it all go, falling into the pure energy of the dance. 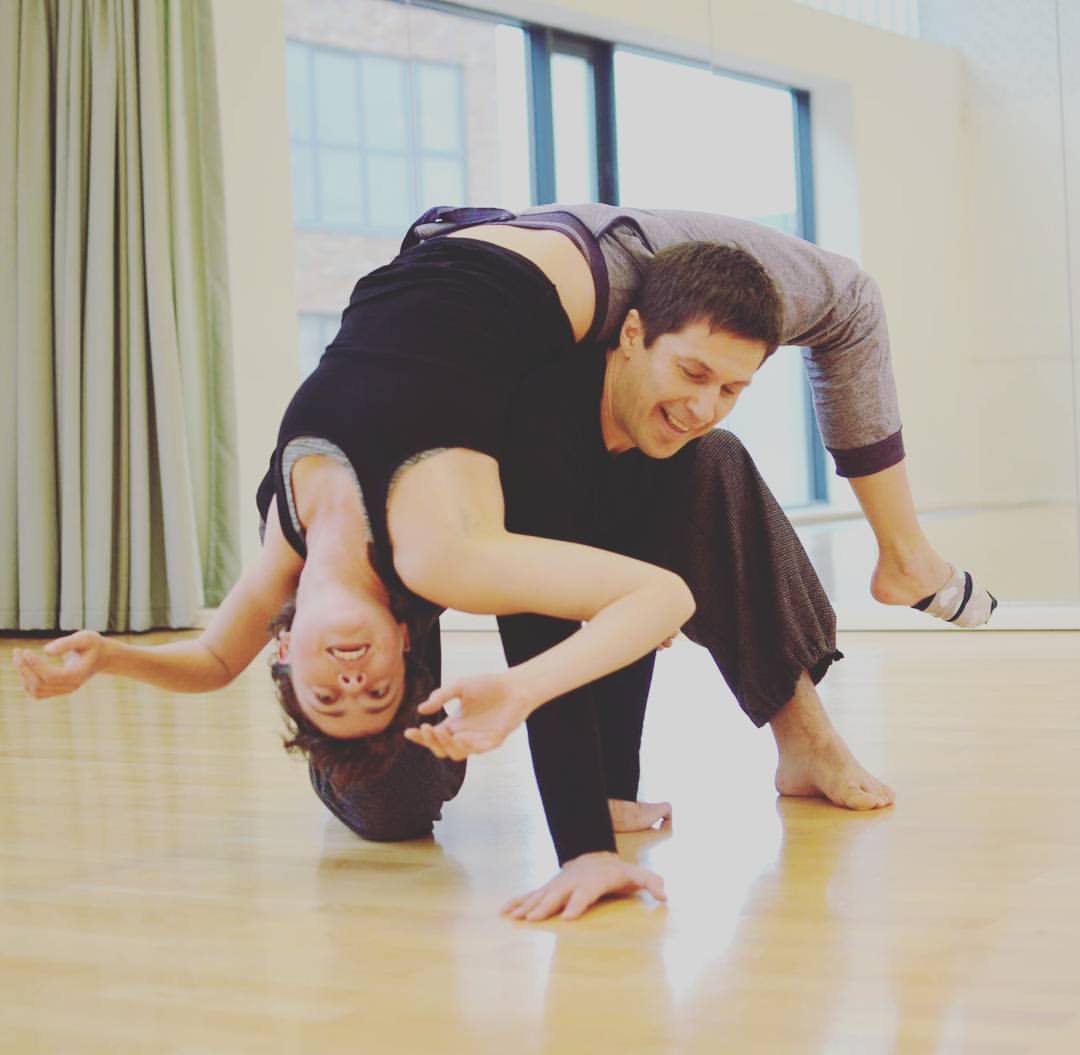 "Oh hello back-space, didn’t even see you there."

As an experienced body-mover, remedial massage therapist, yoga and acrobatics teacher, Yaeli is a mishmash of things serious and playful. She’s currently working, dancing and teaching in Dublin while continuing her studies in the Irish College of Osteopathic Medicine, Cork. She takes an intuitive approach to Contact Improvisation, exploring the body’s most efficient, soft and powerful ways of moving in space.

"Watch and being watched"

I studied acting in Moscow at Russian University of Theatre Arts. After finishing my study I joined repertoir theatre in Moscow Malaya Bronnaya Theatre in 2007 at the same time discover contact improvisation. I've been regularly practicing Contact Improvisation since then, participating in workshops and festivals including Contact Improvisation Festivals in Moscow, Italy and Israel. From 2011 till present I work with Echo Echo Dance Theatre Company as a performer, teacher and director. I'm very interest in Contact Improvisation as it allow to compose instantly using a very rich movement material, that relates to our everyday 'ordinary' life in a metaphoric way.

Zoe Ramsey is currently an ensemble member of Echo Echo Dance Theatre Company performing in a wide range of artistic projects including The Cove (2017), Walk By (2016), Lost in Frost (2016), Ludo Lusi Lusum (2014), Motion Ensemble (2013), Without (2013), The Chess Piece (2010) to name but a few. Zoe teaches regularly and works with adults and children of all ages including Echo Echo’s Moving Schools projects. Zoe graduated from Falmouth University with a BA Hons in Dance Performance. Since graduating she has practiced different movement forms such as Corporeal mime, masked theatre and different martial art practices. Zoe has been performing professionally since 2010 with Echo Echo and other companies such as LUXe Processional Theatre Company and is continuing to develop her artistic practice. 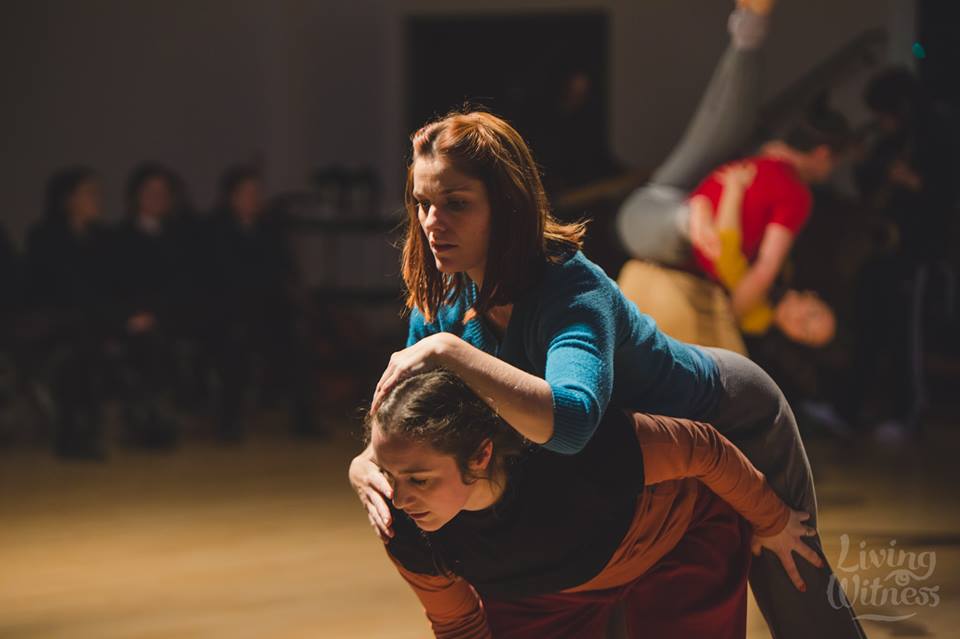 "This workshop will invite you to embrace the poetic possibilities of people meeting in movement and the rich compositional potential of Contact Improvisation."

Ayesha is a freelance contemporary dance artist based in Derry, and the Associate Artistic Director of Echo Echo Dance Theatre Company, as well as a member of the Echo Echo Ensemble. She works as a performer, choreographer, improviser and teacher in the North West of Ireland and further afield. Ayesha is interested in the poetic potential of movement. With this viewpoint, she explores Contact Improvisation with people of all ages and abilities. Ayesha is committed to developing her particular approach to this movement practice through professional and participatory arts projects and workshops.

Kelly graduated in 2009 with a first class honours degree in Dance from University of Ulster.. She became an ensemble member of Echo Echo Dance Theatre Company the same year and has been teaching, directing, choreographing, performing and writing ever since.. Kelly performs regularly locally, nationally and internationally with her own work and as part of the Echo Echo ensemble, including places such as Hong Kong and Sweden. She also directs Echo Echo's sister company Body Wisdom who also perform regularly in the local performing arts scene.Kelly has been developing her contact improvisation skills under Steve Batts for last 10 years as part of Echo Echo. She has also worked with contact improvisation teachers such as Leilani Weiss, Angelica Doniy, Alexandra Soshnikova and Sergei Golovnya.